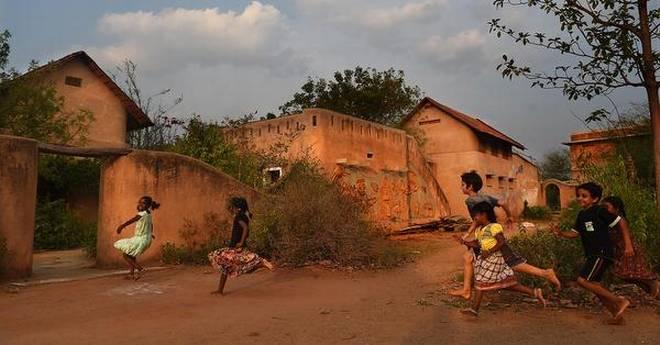 In 2008, a group of plucky educationists moved to the outskirts of the temple town of Tiruvannamalai in north-central Tamil Nadu and started a school that believes in honest, empowering and potentially disconcerting tolerance.

“Wouldn’t acceptance be a better word?” asks Leela Arnon Bowley, 43, kindergarten teacher at the Marudam Farm School, a day school for about 100 children of locals, villagers, urbanites and expats, including students with disabilities and special needs, across economic backgrounds and denominations. “Ideologically, this was a great decision, but how was it going to work out pedagogically? That was the question,” recalls founder-trustee Poornima Arun, 43.

Visually, Marudam (Tamil for farmland) rises as a cluster of earthy, aesthetic structures set on eight agrarian acres. Artwork by the school community lies scattered about the almost entirely solar-powered campus, where jackfruit, pomegranate and mango trees grow by paddy fields in which, two years ago when the rains were copious, students cultivated several vegetables and madumuzhangi, a lesser-known indigenous variety of rice. “Learning is hands-on, children are physically and socially involved, and nature is never far from us,” says the soft-spoken Harish N.V., 26, teacher of social sciences. This year’s acute drought, however, is causing anxiety in the ecologically sensitive school, which recycles every drop of water.

Tiruvannamalai has been a lodestone for diverse settlers since the early 1920s, when the philosopher-saint Ramana Maharshi’s ashram came up here. Marudam’s student body is thus a microcosm of society at large.

“The peer learning that happens is simply incredible,” says Karthik Narayanan, 28, teacher of maths and gardening. A discussion on ground water, for instance, had village children pitching in with practical information on how wells are dug, and why the soil and bedrock matters, while the more bookish learners talked about aquifers and water tables. It is the sure-footed first generation learner from a goat-herding family that leads her class on hiking trips, pointing to birdand animal life with a sharp eye, commanding the respect of peers older and younger than herself.

“At Marudam, equality is more than theoretical,” says K.Pachaiappan, 29, the much-loved teacher of Tamil. Sustained by donations, Marudam never turns children away because they lack the money to pay fees, though the school intends to remain small and diverse. If cliques form, or someone has difficulty with sharing, resolution is found over animated debates in ‘circle time’. “Learning is natural and even unavoidable for children once they have the space and time to explore,” says Arnon Bowley.Marudam now awaits accreditation from Tamil Nadu’s Directorate of Matriculation Schools. One mother says her daughter wants to go to school even when she is unwell, and her initially reluctant husband has come to appreciate the school’s impact on their child’s sense of anbu (love) and suyanambikkai (self-belief). The world could do with more of both.

This article by Lalitha Sridhar appeared on The Hindu dated May 13, 2017.